Dad hated religion but he hated what society became in its absence even more. I don’t know that he recognized the dichotomy there but it kept him embroiled in an emotional battle that he foisted on his own kids as he constantly prodded and poked us about concepts he’d caught wind of from his students and from which he was determined to save us.

Sometime after his insistence that my mother convert to Catholicism, my dad lost his faith. Mom went Whole Hog into Catholicism, The Father, The Son, The Holy Spirit, et al. We never said Holy Ghost in our house. It’d send dad into fits of laughter and taunting and who, together with mom, delighted at the hocus-pocus delivered by Vatican II and wanna-be Catholics, also known as Protestants, who referred to the Most Holy Presence as a mere ghost.

It’s accurate to say that a pall fell over the kitchen.  The whole house, really. Dad’s reactions were big.  Always. My response to his question was a sickening mixture of fear and dread. Humor was the underlying theme of our early family life and, truthfully, my entire life. Even now. But my little chocolate chant wasn’t funny to dad. His expectation that we not be assholes eclipsed his struggling disbelief in God and his absolute belief that Catholics valued blind faith and ritualistic chanting more than a transcendental study of the Great Unknown.

I wasn’t slapped for my irreverence. I’d braced myself for it. I broke the terrifying silence with a clumsy, “Um, I dropped my fork I think. Is it my turn for dishes tonight? I’ll do them either way. I’ll just do the dishes tonight.”  GB responded, “It’s your turn anyway you stupid idiot,”  and in that one spectacular and glorious instant, my brother relieved me of the white-hot focus of my dad’s insanity.  Dad’s glare oozed from me to GB seamlessly. “But I’ll sweep the floor,” GB added.

We ate dinner at the table every evening in my house and attendance was required, as was eating every scrap on the plate, like it or not. Complaining about food at our dinner table was an invitation to a twenty-minute lecture on gratitude and respect, neither of which I had even a smidgen. I didn’t fully comprehend the concept of thankful and doubt I would have felt any gratitude for my life as compared to say, a starving child in Africa, had I even been able to imagine Africa or the starving kids who apparently lived there. This was my life and that was theirs. Nothing I could do about it. The thought never occurred to me that something should be done about hunger elsewhere. As for mom cooking dinner, I never considered what she might be doing if she weren’t cooking and serving dinner. My job was to eat. Hers was to bring food to the table. Respect? I feared my parents. Same thing back in those days.  I wasn’t a critical thinker.  I didn’t dare.

Luckily, I don’t remember not liking many things on my plate except maybe salmon patties, which we ate every Friday during Lent. I hated salmon patties, and as far as I know, I still do. Mom’s particular recipe looked like little oddly formed discs of hay with flecks of black pepper. The fish was fishy, and the dry breadcrumbs, or more likely, Nabisco Saltine Crackers, were stiff and sharp. Tartar sauce, consisting of Miracle Whip with chopped dill pickles, did little to moisten the haystacks, but I tried it again every Friday, hoping I’d learn to appreciate the disguise of sour pickles and gloppy salad dressing on my fishy haystacks. I never did. Still, I ate them to avoid the spanking or lecture. 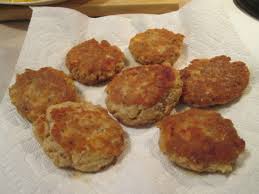 of my mouth offered me an opportunity to express my otherwise unspoken protest of the meal, grabbing my throat and choking, pulling the translucent splinter out of my mouth in a grand display of revulsion. I’d smile and say something adequately reticent, “Yum, these hay things are so good!” Then I’d gag a little and take another bite, hoping I’d choke again and maybe this time for real and mom would have to take me to the emergency room where the medical staff would look down their noses at my mother for forcing such a complicated Catholic ritual on me, the Delicate Agnostic Indian Princess, yet another secret dream of mine. “Salmon patties every Friday?” they’d ask. “Shame on you, you snotty bitch!”

My dad would’ve been violent had he witnessed anything like this but he didn’t go to doctor’s offices or hospitals with mom. Even as the consummate feminist with a full-time job, trips to see doctors were mom’s responsibility, along with cooking, laundry, church, birthday parties, Christmas shopping, sheet changing, vacuuming, sink and toilet scrubbing, floor mopping, homework assistance, parent/teacher conferences, buying school supplies, paying bills and pretty much everything besides mowing the lawn, which my dad did between bouts of mechanical insanity when the mower quit running. Eventually, GB took over the mowing but dad continued to cuss and tinker with the motor, shaming GB for causing it to break down again.

Still, he would have been outraged had mom shared the story of doctors looking down their protestant noses at us. He would have threatened to call or even go visit the doctors and give them a piece of his mind for making my mother uncomfortable, questioning her choices and how dare they insert themselves into our home life and didn’t they know about keeping their goddamned opinions to themselves when it came to the personal religion and dinner choices within The Family? Mom would wave him off with her fork, having resumed her rightful place opposite him at the head of the table to finish her meal and preside over the choking drama queen, my own Indian Princess dream replaced with her harsher reality. And, she’d make sure I ate every dry scrap of my hay disc.

happened at school that day. Occasionally it was mild chit-chat with mom, which may have been how most kids my age spent the dinner hour. Mom and dad chatting. Kids eating quietly, grateful for the food, and brimming with respect for their parents. Even these unusual quieter meals were fraught with trepidation for us kids. Years of being lulled into a hopeful sense of near-normalcy by rare glimpses of Rockwellian meal-time-in-Small-Town-America were just so much nervous fantasy. Just a glossy image in Life Magazine, opposite the full-color pages with photos of starving kids in Africa. We knew the powder keg of reality could explode at any second, sending dad into an angry, passionate homily about anything from an aberrant teacher at school committing the outrageous act of disagreeing with him or something that struck an odd chord in his fervent anti-Godism during our daily prayer before dinner. Or blasphemous chants about chocolate custard.