Marriage. It’s a funny thing. I swore it off after the first time around but I eventually found another guy I figured I could tolerate. He liked me too, back then. Over the past 22 or so years our union has grown into a kind of mutual appreciation of the convenience and efficiency of coupling. That sounds a bit like a PVC elbow connection and I visualize the maze of grey and white pipes hanging under the ceiling joists in my basement. Not a very attractive image but fairly efficient. That’s our marriage. Functional. Efficient.

It’s not that we don’t love each other because I’m sure we do but I have news for the young bride and groom skipping down the aisle: love is a verb. I mean yeah, the early years are all raunchy sex and loud music but eventually the sidewalk needs shoveled, the shitter needs replaced and the chicken needs fried. Somebody invariably has to clean up somebody else’s vomit. That’s where love comes in because nobody does that stuff for fun.

We’re certainly not romantic in any way, although, in spite of my insistence that he not go to any effort or spend any money I get the obligatory (six?) roses every February 14th.  He’s a good guy really and all told, I’m not a great wife. Still, the relationship works out okay. We have a pretty decent marriage.

Today, however, was one of those times where the old buyer’s remorse (re)surfaces and makes me wonder what the hell I was thinking 22 years ago.

I suspect my spouse was contemplating the same kind of thing when he woke up and found out he would spend most of the day installing a new appliance in our kitchen.  He could be mowing, after all.

Our old Insinkerator garbage disposal has been shooting craps now for several months. We aren’t exactly handy DIY types so our appliances often limp along for lengthy stretches until we can’t ignore them any longer. The disposal finally quit working almost altogether a few days ago.

We tried all the old tricks…dish soap, ice cubes, forcing the blades loose with a butter knife, and finally, the spouse’s old standby—banging the bottom of the unit with a hammer.  I’m not sure why he thinks this works but he’s been doing it for years.

My contribution to the new installation was ordering the disposer and picking it up from the store, plus, I spent several days trying to find just the right unit; one that would fit under the sink and have the correct type of electrical cord.  I even watched a video on how to install it. Per the video there are a couple of handy tricks to installing the thing but overall it’s an easy deal.

I offered to show my personal handyman the video but naturally, he had no use for it.  He never does.  Videos are for me and he certainly doesn’t need them, he says.

My husband installed the new disposer alone.  I left the house.  I’ve been through enough appliance installations to know that things like this just go better when I’m gone.  I don’t mind cuss words at all, especially when I’m the one screaming them.  It’s the anger and frustration and self-flagellation that just sets me on edge.  It ends up feeling like my fault when the flanges don’t line up or the screws fall behind rusty cans of floor wax and window cleaner.  I just can’t take it.

I just don’t care about the silver ring.  The garbage goes down the hole and is ground into shit soup, which I quit thinking about altogether the millisecond it disappears under those creepy black flaps.  The devil flaps.  Shielding the noisy violence which liquefies my coffee grounds and dinner scraps. And so hard to clean.

Either way, our silver ring being slightly crooked did not change the function of the appliance.   He just has to assign some level of blame for what he sees as Life’s Big Disappointments.  Like screws falling behind dusty cans of insecticide or gaskets out of whack and, the real biggie, hardwires vs. plug-ins.

When I returned home later in the day, I knew immediately that he’d gotten the job done.  He always does.  The sink is finally draining properly after two weeks of flipping the switch on and off until the unit locks up and has to be reset with the little red button on the bottom. Or banged with a hammer.  No more slimy sink.  Yay.

So, there he was on the porch looking proud and relieved, smoking a cigar and chasing it with a cold beer.  I knew he was feeling good about the new garbage disposer.  I listened vaguely as he described the installation ordeal and as he complained about the bottom section that he battled to get turned correctly and locked into place.  He was still a little unsure about it.

“Oh, wait…. in that video I watched on how to install the garbage disposal they talked about getting that bottom section locked into place.  You wanna’ watch it? ” I asked him.  Pretty logical question I thought.

“Because it shows how to get that bottom section figured out.”

“Maybe next time just call a professional to install it.”

“No, I’m just saying, you know, it shows how to do that bottom section so it must be tricky.  Or, you know, I don’t know.  And getting the hoses lined up to the dishwasher and stuff.”

“The hoses are lined up fine.  Just like before.  Nothing changed.  I don’t need to watch a video.”

Anyway, he smoked his little cigar and patted himself on the back and instructed me to give the new appliance a few hours for something to setup—I assume he meant the silver ring, which would finally be satisfactorily centered since he’d done it himself.

I immediately gave the new disposer a quick spin.  Nice and quiet. I started the dishwasher, grudgingly applied minimal makeup to my face and found adequately clean clothes to wear to his annual company party which was hosted in a fancy air-conditioned suite at the minor league baseball park near our home.  Free food. Yay.  Free beer for him.  Eh.

Before we left for the baseball game he asked me if I’d run the dishwasher.

“Well, it didn’t drain. There’s water standing in the bottom.  I could hear that it wasn’t draining.”  He’s famous for hearing things go wrong in the house. He knows before anybody else that something is wrong because he has memorized all the proper sounds—whether it’s the dishwasher not draining or the sump pump kicking on when it’s not raining, or even when the vacuum motor is straining.  It’s handy really.  He hears problems.   Except he doesn’t sleep very well because he can always hear the AC or the furnace never kicking on or off. 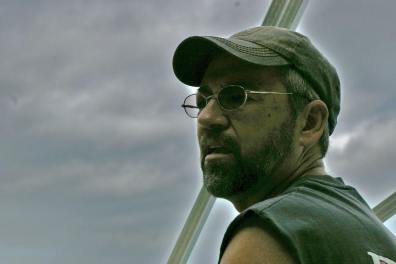 The Universal ‘What’s That Noise’ Face

noise?” I never hear anything. It always sounds fine to me. And why does he even ask me?  He never, ever takes my word on things.  No matter what I offer in the way of explanation, he shakes his head.  No. That’s not it.

So I said, “The dishwasher worked before… it pretty much has to have something to do with the disposer, right?” We both knew the truth here but I had to ask.

“No.  Something’s wrong with the dishwasher.  Looks like we’ll have to get a new one.”

“But…are the hoses lined up?  The new disposer is so much smaller…is the dishwasher hose angled properly to drain up into the sink?”  I knew this wouldn’t go over well.  I was trying to be super gentle.

“No. That’s not it. There’s a pump in the dishwasher that pumps the dirty water out.  It doesn’t rely on gravity to drain. For fuck sake.”

Great.  Looking so forward to the baseball game at that point.  I knew he’d mucked something up and that more than likely we’d end up with a new dishwasher which meant I’d have to spend another entire day somewhere else while he installed another, bigger, more complicated appliance and he would have to invite a friend over to help him because there is no way in hell I am hanging around for that.  God forbid I drop a screw through the AC vent like last time.

Anyway.  The game was not horrible.  I sat in the outside suite seats beside a hipster guy with linty cornrows all over his sweaty head.  He’d also braided his goatee into a tiny greasy straight line which hung off his chin like shiny well-disciplined drool.  He had several gold teeth, made the sign of the cross and prayed before eating each plateful of free food, which was almost constantly.  He drank beer and smoked cigarettes and watched the baseball game with great interest, cheering the team and clapping. Big fan of the home-team.

He seemed a little nervous that I might try to chat with him.  So I did.   I tried. I’ve lost my easy way with people where I can talk to just about any kind of person about pretty much anything.  Even corn-rowed hipsters.  I blame it on marriage.  I’m just not that cool anymore.  The hipster was polite.  His name was Austin or Dallas or something else Texan.  He bolted after the seventh inning and a final prayer. 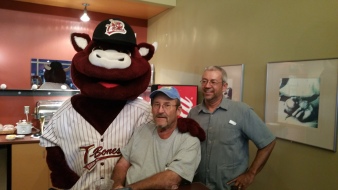 dishwasher. My spouse was busy with his coworkers and the free beer.  I texted an unmarried bestie and updated her on how being married is a dick life sometimes.  Like today.  Stay single I told her. She laughed.  Ha ha. Lol. She didn’t believe me.  She was impressed that I was at a baseball game.  She loves baseball.  She adores my spouse. She scolded me for being bitchy. She doesn’t get it because she’s single.

I did an online search about why dishwashers don’t drain correctly. I knew I’d found the solution and I knew the minute we got home I’d just pull up the little bobber thing and pour a bunch of vinegar on it and probably it was just clogged from weeks of the old Insinkerator not draining well. What a relief. I also knew that I would not tell my husband about this handy fix because he would not believe it and never acknowledge that I’d fixed it or even admit that he knew what the hell I was talking about and just like all the other times I’d fixed little things around the house I would just keep quiet about it and he would either take credit for it or deny there was ever anything wrong with it.

I was grateful when fireworks exploded over the stadium.  Game over.  We lost.  The goateed hipster must’ve seen it coming. Time to fix the dishwasher.

When we got home I remembered the three-foot pile of clothing I’d left on the bed so I re-hung and refolded that mess before starting on my vinegar idea.  I could hear my spouse already in the kitchen jacking around with the hoses. Damn it.  Pretty soon he came in the bedroom. All smiles.  Partly free-beer-smiles and partly that goofy moment where he admits he mucked-something-up smiles. Lots of smiling.

“I took the hose off and realized there’s a little punch-out hole on the disposal for the dishwasher hose.  I’d forgotten about that.  I punched that little tab out and it’s draining fine now.  Damn. That was pretty stupid.”

“Oh. Huh. I remember that from the video.” I smiled. Marriage. It’s a funny thing.

19 thoughts on “Marriage and old Appliances”