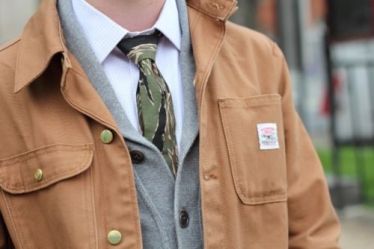 Five years ago I visited Mickey’s Surplus in Kansas City and found a sale on Carhartt overalls. I didn’t yet know the full impact of the Carhartt brand but I knew it was a pretty big deal because of a giant family riff some years earlier over a particular Carhartt jacket I’d found in a closet and given to the wrong male family member. He’d procrastinated about returning the jacket when the actual owner showed up and demanded it back. Took a while for that little deal to die down.

I found some new Carhartt overalls on sale for $17.00 at Mickey’s and I thought…hmmm…Christmas is coming up. So, I dug through the giant pile of canvas pants until I found two pair in the right sizes, one for my husband and one for my son-in-law.

My husband was almost tickled pink over the outfit and would have been completely pink had the overalls been the preferred tan color but the only one in his size was black. “They’ll be so hot,” he complained. Still, he could barely hide his nearly spiritual reaction to the pants and he put them on immediately. He still mentions how hot they are every time he wears them, even five years later. He’s a chronic complainer so I let it go. I’ve seen him actually caress the folded overalls and smile when he puts them back in his dresser. It’s a strange thing.

Right after I bought the overalls, my son-in-law left the Country for Official

Immigration Business with the Department of Homeland Security in Juarez—kind of a big deal there. He missed Christmas at my house so I put the overalls where I put everything else I don’t know what to do with—in the basement. I forgot about them the very second I switched off the light and closed the door.  That’s how I do things. Stash and forget. I once had something like six bottles of catsup in the pantry because I kept forgetting that I’d already bought some.

I never thought again about the overalls until the other day when I was down there looking for something and saw them on a shelf. The size of the pants is what threw me. Nobody I know wears a 36×28. The only man short enough is Manny, my son-in-law. I tossed them on my sewing table to remind myself to ask my husband about them because not only did I forget that I’d stashed them in the basement five years ago, I’d forgotten where they came from or who they belonged to and that I’d actually purchased them my own self.

Before I made it back upstairs my husband came down for something and spotted the Carhartts on my table. He literally stormed across the room, grabbed the overalls and demanded to know who they belonged to. While we were racking our brains, and I’m not kidding about this, he was running his hand over the fabric like it was some kind of domesticated lion, rare and precious. He kept glancing at the pants with what looked to me like lust.

Between us, we pieced the story back together about where the overalls came from and I flashed back to that fateful day when, for reasons still unknown, I wandered into an army surplus store and stumbled onto a giant pile of deeply discounted Carhartts.

Once I’d remembered the whole thing I was anxious for my son-in-law to come for a visit so that I could give him the five-year-late Christmas gift. When he arrived is when I witnessed a most profound confirmation that there is something akin to Catnip for men sewn into these heavy, scratchy, manly pants.

Manny is Mexican. Let’s face it, and I don’t care how PC anybody is, Mexican men are manly. Unless they admit to being gay, and per Manny, they never do that unless they become Americans. I can see all kinds of people being offended here but that’s just the way it is in my house. Nobody’s judging anybody, I’m just saying, Manny is Mexican.

He is a man of few words and physically reserved. We don’t hug Manny. He’s not affectionate, except with his children. He is sweet and kind and generous with my grandchildren and this is the reason I love him like a real son. After a few beers he’ll let me steal a hug and he’ll even smile about it, but he won’t hug me back. Except he did that one time—when he got back from his trip to Juarez. He hugged me back, right there in the driveway in front of everybody. Ordinarily though, he’s

unflappable. He doesn’t react and there are no histrionics with Manny. He’s as cool as a banana pepper.

He’d actually been at the house twice before I remembered to give him the pants. When my husband saw them still draped across the chair he was stunned, “Why didn’t you give Manny the Carhartts????”  I forgot. Is there a pattern here? Anyway, Manny showed up again the next day and my husband, grinning like a proud parent, handed the pants over while I explained how I’d bought them right before that big important meeting he’d attended in Juarez, and that I’d forgotten all about them.

There was a subtle softening in Manny’s face. He reached for the pants like they were his long-lost bicycle from back home, or his first soccer ball or his first girlfriend (similar affection, I assume). The pants remained folded for a minute as he held them horizontal, one hand on top, and yes, he caressed them as his father-in-law had done. He put the pants on and adjusted the suspenders, snapped the millions of snaps on the legs, flattened the pockets and stroked the fabric.

I asked Manny if he thought the Carhartts would come in handy at work. “Oh,” he whispered, “Yessssss.”

Then, and I shit you not, he giggled.

It’s universal, I suspect. I imagine professional suit and tie types wear Carhartt overalls with the same kind of oozy satisfaction my working class men feel when they wear theirs. Carhartt overalls are like a wearable man-cave. Manly. Weird.